Ad Fraud Ramps Up Ahead of the Holidays: Four Ways Marketers Can Avoid It Now

The height of online holiday shopping is now in full swing, however, before Black Friday and Cyber Monday hit, ad fraud was ticking upward in preparation for the holiday online blitz. Online ad spending historically spikes in the fourth quarter as marketers vie for consumer attention in the weeks ramping up to the holidays. According to the IAB’s annual ad revenue report, in 2017 internet advertising revenue in Q4 was 20 percent higher than Q3. As demand increases, so too does ad traffic from bots, compromised devices and malware. Fraudsters seek to take advantage of the increased spending, and advertisers look to fulfill campaign goals in a tighter marketplace.

Looking at the percentages of fraudulent ad traffic over the past three months within the programmatic ecosystem, we compared the averages from September, October and November. September had an average of 11.5 percent fraudulent traffic and October had an average of 11.6 percent. But from Nov. 1 through Nov. 21 (the weeks leading up to Thanksgiving), fraudulent traffic jumped to 14.2 percent – a 22 percent increase from October and a 23 percent increase from September. 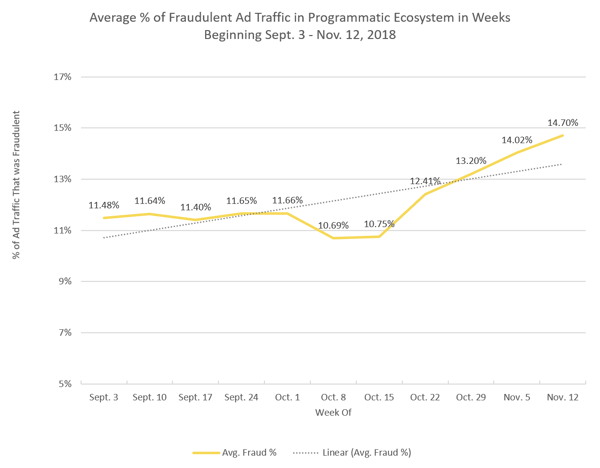 So what can marketers do to combat the rise in fraudulent ad traffic during the holidays? Here’s a few tips:

While ad fraud appears to be increasing as the quarter progresses, with proper oversight and careful buying habits in place, it can be largely avoided for a profitable, fraud-free holiday season.