12% of Global Ad Traffic is Fraudulent; UK and US See Higher Percentages

Not all ad traffic is created equal. Fraudulent traffic can skew campaigns, poison analytics, and waste advertising dollars on non-human ad views. Ad fraud numbers are an important metric to keep an eye on in the digital ad industry and can vary depending on device types and locations where ads are served.

A PDF of our Global Ad Fraud Report for September 2018 is provided in the link below.

At Fraudlogix, we looked at 30 days of data from September 2018 so we could paint a current picture of how much fraudulent traffic is flowing through the real time bidding (RTB) pipelines, which devices are more susceptible to it, and which areas of the world are more likely to be hit with it. Below are the results from that. Fraudlogix’s pixel-based technology regularly monitors data from 640+ million unique users, 1.2 billion unique devices, and 12 million URLs monthly. We map the latest devices, locations, bots, behaviors, and hacking tactics that are being used by digital fraudsters. Here's some highlights of what we found:

Globally, 12% of all digital ad traffic was fraudulent.

By fraudulent, we mean that the ad impressions were generated by bots, compromised devices, and other nefarious means, rending the impressions fraudulent (i.e., advertisers paid for these impressions with the understanding that they would be served to humans and they were not). Looking at digital ad traffic globally (all locations and all devices), we found 12.32% of it to be fraudulent.

The UK saw the highest percentage of ad fraud at 22%, followed by the US at 15%.

Digital ad traffic from desktop devices was 18% fraudulent while mobile was 10% fraudulent. 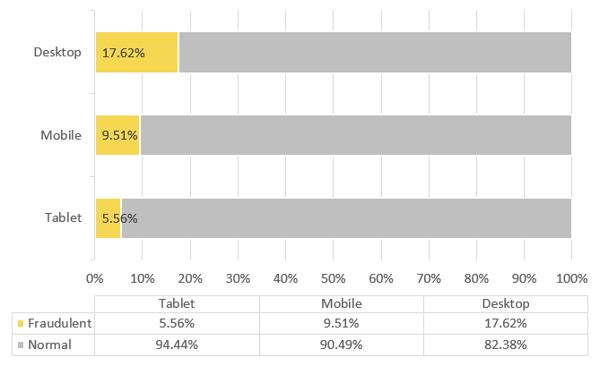 Keeping the industry updated on the latest data and threats we see in the digital ad community is important, so we we'll be publishing regular updates on ad fraud percentages as well as which countries, devices, browsers, and operating systems are being taking advantage the most for ad fraud schemes. Stay tuned.