This post concentrates on the percentage of fraud that came from devices running the most-common operating systems. We've grouped together numerous versions of each OS into OS families. Keep in mind that  Fraudlogix’s pixel-based technology regularly monitors data from 710 million unique users, 1.2 billion unique devices, and 300+ million URLs and apps monthly. We map the latest devices, locations, bots, behaviors and hacking tactics that are being used by digital fraudsters within mobile, in-app, display, video, and OTT environments. Key data around operating systems and ad fraud is included below.

Android OS was the most commonly observed operating system 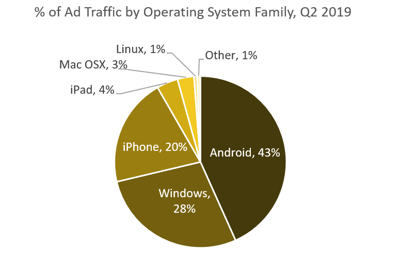 14.8% of Android ad traffic was fraudulent