The Latin American region had the highest percentage of fraudulent traffic globally in Q2 2019 with 13.5% of its ad traffic determined to be invalid. Globally, the fraud percent was 12%.

This post concentrates on the current percentage of fraud, broken down into four major global business regions [Asia–Pacific, including India (APAC); Europe, the Middle East and Africa, including Russia (EMEA); Latin America, including Mexico (LATAM); and North America (NA)].  Keep in mind that  Fraudlogix’s pixel-based technology regularly monitors data from 710+ million unique users, 1.2 billion unique devices, and 300+ million URLs and apps monthly. We map the latest devices, locations, bots, behaviors and hacking tactics that are being used by digital fraudsters within mobile, in-app, display, video, and OTT environments. Key insights and data are included below:

13.5% of LATAM ad traffic was fraudulent - the highest among four global regions. 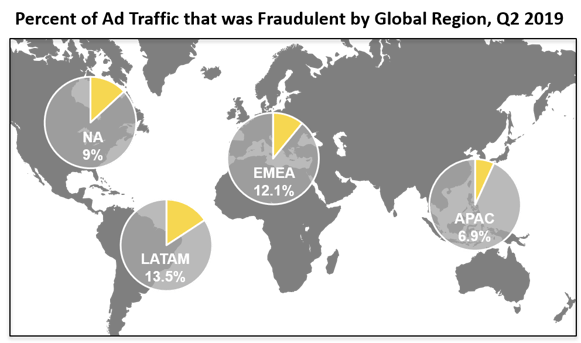 In the United States, 9.7% of ad traffic was fraudulent

In the United States, 9.7% of ad traffic was fraudulent during the second quarter of 2019, lower than the global percentage of 11.9%. A majority of traffic (66.8%) was mobile, which is higher than the 62% seen globally.