Globally, across all devices and regions, the percent of fraudulent ad traffic hovered around 12% in Q2 2019. A majority (62%) of it came from mobile devices with 11.6% of that traffic fraudulent.

This post concentrates on the current percentage of fraud in the programmatic landscape and within each of the major device channels (mobile, desktop, and tablet).  Keep in mind that  Fraudlogix’s pixel-based technology regularly monitors data from 710+ million unique users, 1.2 billion unique devices, and 300+ million URLs and apps monthly. We map the latest devices, locations, bots, behaviors and hacking tactics that are being used by digital fraudsters within mobile, in-app, display, video, and OTT environments. Key insights and data included below.

Looking at digital ad traffic globally (all locations and all device types), we found that 11.9% of it was fraudulent, a decrease from the previous quarter, but close to what we first reported in the Fall of 2018. In the fourth quarter of 2018 we saw an increase in fraud, which correlated with the increase in online advertising during the holiday season. Fraud levels  decreased from from their highest levels in January throughout the the first quarter of 2019. 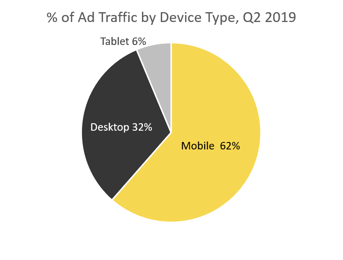 A majority of ad traffic observed, 61%, continued to come from mobile devices. This is inline with the increase in mobile advertising spending seen throughout the industry. Desktop ad traffic accounted for 32% and tablet 6%.